(Note: I’ve used the matrix contained in this post previously, but it’s equally appropriate regarding today’s topic – hopefully it prints out cleaner than it did the last time)

One of the pillars of President Biden’s “Build Back Better” agenda for economic recovery is an America where everyone enjoys a fair return for their work and an equal chance to get ahead.  An economy where Black, Latino, Asian American, Pacific Islander and Native American workers and families are finally welcomed as full participants.

The president has declared he has a mandate “to achieve racial justice and root out systemic racism in this country.” And while I agree with his goal of addressing economic inequity vis-a-vis racism as a general topic, I could not disagree more with his position regarding ‘systemic racism.’  So, perhaps it would be wise to first define just what systemic racism is and where it exists because if you search “systemic racism” on the Internet, prepare to go down a rabbit hole of never-ending statistics with predictable opinions congruent with existing ideological agendas.

To be clear, racism has existed in every society throughout history, and depending upon an individual’s source of information, they can find numerous instances of racism from the Aryan Nation skinheads to BLM rioters to that bastion of liberal ideology, Harvard University, where its admissions policy routinely discriminates against Asian students in favor of blacks and Hispanics.  Yes, instances of racism occur in America—but it is not systemic; as former Attorney General Bill Barr cogently opined, “The only systemic racism that exists in this country is in our public education system.”

A noted, several weeks ago, I wrote about income inequality, but according to the editor I was late submitting my commentary and the matrix I included as an illustration was omitted.  However, the data from that matrix is even more relevant to this topic, so I am using it again here–let’s hope Mr. Peterson sees fit to print it in today’s Vail Daily. 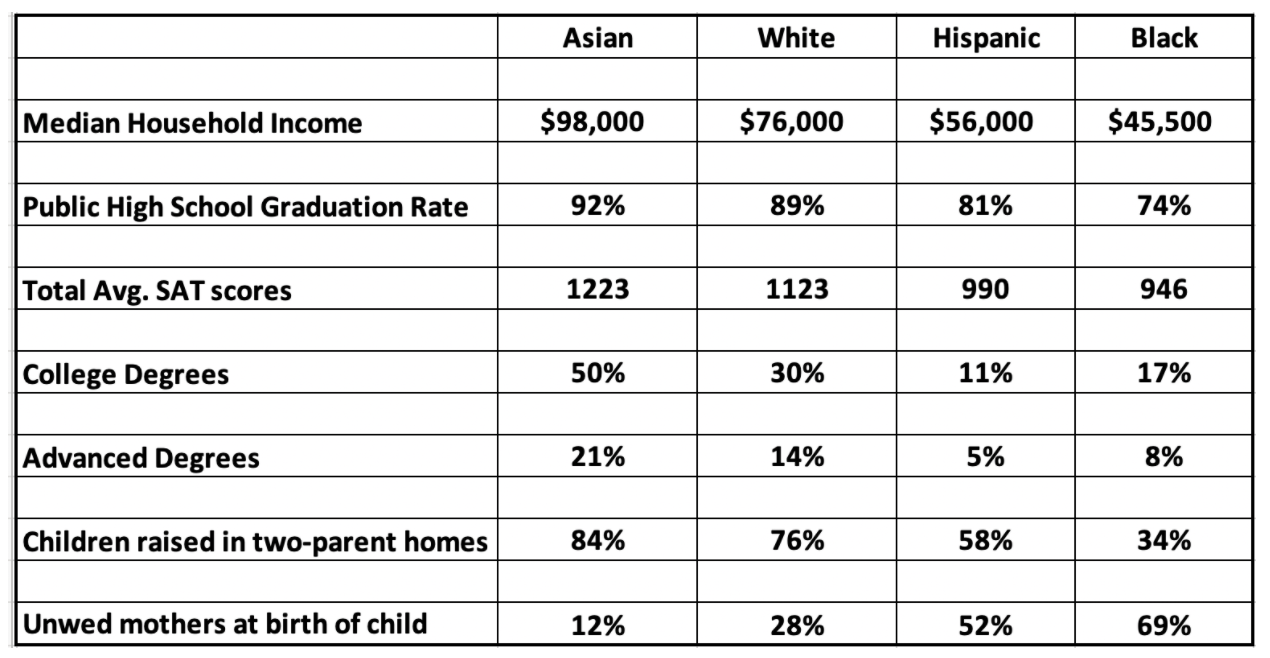 Take what you will from this information that touches numerous inter-related social issues ranging from median household income to out-of-wedlock birthrates.  Some will be surprised, some shocked and some saddened by what they see in the matrix; but the illustration is simply raw empirical data free from value judgments.  Differences in culture, race, geography, ethnicity, language, gender, economics, technology, teachers, funding and parental attitudes are all contributing factors to this data, so it’s best to leave the conclusions to the social scientists and not the politicians who will use it to fit an agenda; nonetheless, the information tells a story that cannot be ignored.

However, there is good news in one particular aspect of the issue that doesn’t have to be ignored.  The new administration now has a unique opportunity to begin redressing this multi-faceted problem, at least from an educational standpoint.  The republicans held the presidency and both house of congress in 2017-2019 but were unable to bring the necessary resources to bear on public education because, among other reasons, they lacked the critical support of two of the most powerful unions in America—the National Education Association and the American Federation of Teachers.  However, both unions are highly supportive of democrat policy.  (Note: in 2020 the two unions gave 95% of their financial support, $43,000,000, to democrats or democrat causes.)

And what could be more propitious in terms of tackling the myriad issues surrounding public education than having control of the White House, both chambers of Congress and the support of the teachers’ unions?  And what better time to act than during the administration’s first 100 days?  And lastly, what could possibly be a more fitting project for a First Lady with a doctorate in education to become involved with?

Let’s hope Mr. Biden keeps his promise, that his new Department of Education Secretary begins addressing this matter immediately and that Mrs. Biden sees this as an opportunity that’s right in her wheelhouse.  Let’s also look at this issue again prior to the next full school year to see how they’re progressing.

Quote of the day: “He who opens a school door, closes a prison.” ― Victor Hugo