Last week I wrote about a fable and its moral—that gentleness and kind persuasion win where force and bluster fail. But this week’s I decided to relate a true story that has no moral nor even an underlying message. It’s simply a fascinating tale about Kenya and the African bush that I wanted to share on the 5th anniversary of the day it occurred.

My wife Bobbi and I were on an early evening game drive with our Masai guide Ping who told us he wanted to track the Enkoyeni lion pride; a pride composed of 2 huge males, 8 lionesses and 10 sub-adults. The pride hadn’t made a kill in a few days and Ping was certain they would hunt that evening.

It was nearing sunset and while the big males rested, an ‘activity’ where male lions excel, we watched the 8 females, and the 10 sub- adults take measure of a herd of wildebeests on a ridgeline. As the pride took up ambush positions Ping excitedly cried out, “They are going to die; they’re all going to die.” Our guide had just spotted two nomadic lionesses with three cubs out on the open savannah roughly 40 meters away.

The two nomadic lionesses were known locally by their Swahili names, Mama Kali (Fierce Mother) and N’gurro (Short Tail.) The locals weren’t sure which of the cubs belonged to which mother, but in lion circles, sisters often assist in raising each other’s cubs. 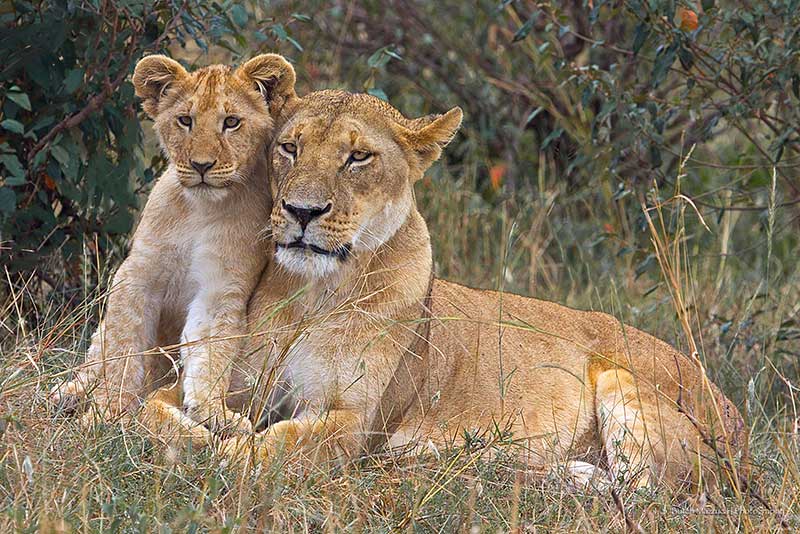 N’gurro had lost part of her tail in a fight (hence the name “Short Tail) and was known never to back down from a confrontation, even when outnumbered. And on this evening, the odds were 18 against 2.

When the Enkoyeni spotted the interlopers, we knew there wouldn’t be a hunt as the pride began aggressively moving towards the intruders when something very strange occurred.

Instead of retreating, Mama Kali and N’gurro turned to face the 18 pursuing lions and initiated an attack. Ping later surmised the nomads knew if they ran, their cubs wouldn’t be able to keep up and would surely be killed by the Enkoyeni lions.

The ensuing fight was in a word, horrific, and an experience Bobbi and I will never forget. Mama Kali took on twelve of the rival pride; N’gurro the other six. The fight was over within minutes, and when it ended, Mama Kali would never leave the spot where she lay; but N’gurro and the cubs escaped into the thick brush of the adjoining territory of the Moniko pride.

Taking up residence between two rival lion prides kept the nomadic lionesses and their cubs in constant jeopardy; and because lions, like most predators are territorial, without an adult male to protect them, the nomads and their cubs were continually at risk.

In this case however, being so close to another pride’s territory was a blessing because as much as the Enkoyeni wanted to tear N’gurro and the three cubs to shreds, the females and sub-adults wouldn’t follow the retreating lioness and cubs across an imaginary line in the middle of the savannah marking the rival Moniko pride’s territory. And watching a pride of lions “put on the brakes” and literally come to a screeching halt as if in an animated movie on the open savannah was surreal.

If the males had been with the pride, perhaps they would have continued the chase, but luckily for N’Gurro and the cubs, on this night the big males were ‘resting.’ I took this photo of N’gurro and one of the cubs the day after the encounter—the body language of the still terrified cub speaks volumes.

We left Kenya several days later believing the other two cubs had been killed in the melee. But upon returning home, we received an email from Ping with a photo of N’gurro and all three cubs. And while no one knows for certain, Ping speculated one of the Moniko pride males had fathered the cubs and was allowing N’gurro to remain in the relative safety of his territory so long as she and the cubs didn’t approach any of the Moniko females.

When friends ask if I took photos of the encounter, my reply is always the same, “The encounter was so horrific we were stunned into silence & inaction; it never even occurred to me to raise my camera.” Nonetheless, the entire event remains etched in our memories.

Quote of the day: “If you can visit but two continents in a lifetime, go to Africa twice!” – Old African expression